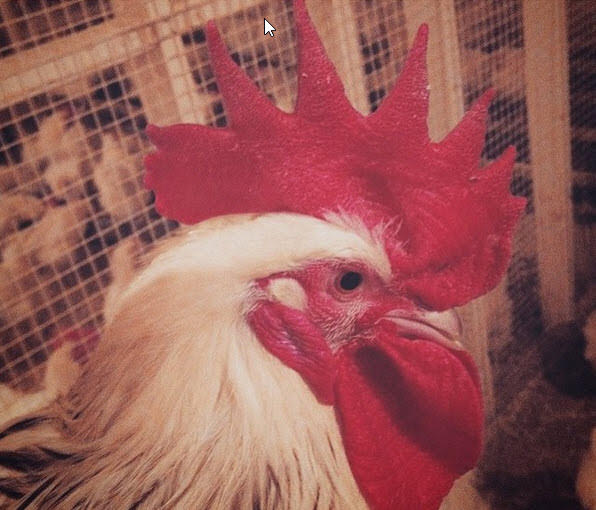 WHAT ARE THE BOYS UP TO

We have heard many stories about the girls in the program but not many stories of what the boys are up! There are specific behaviours that you will find when there are roosters in the pens:

How do roosters protect the flock? They are excellent alarm systems. They use different sounds, calls, and crows to alert the flock. Roosters also walk around the pens several times a day, and station themselves at the entrance where they can be in full view of the hallway to check for predators/intruders.

If an unfamiliar guest enters the barn the roosters use their alarm calls but also will use their attack skills. In a show of aggression the rooster will puff out its hackle feathers (long feathers surrounding the neck) and begin to vibrate its body and kick the ground. This type of threat display is an attempt to intimidate their opponents before an actual attack is necessary. While in attack mode the rooster will jump in the air and will aim his spur (a sharp growth that extends from the leg) in an attempt to injure the intruder. If at this point, the intruder walks away, the rooster is considered more dominant. However, if the intruder waits it out and the rooster is the first to back away, the intruder is considered more dominant.

The dominant rooster will keep his status through small threat gestures such as glaring, raising and fluffing hackle feathers, they will stop other roosters from crowing in mid-crow, and small aggressive pecks. This allows for the dominant rooster to conserve his energy and not have to engage in a full-fledge fight.

Dominant roosters will mate with the hens. Roosters will attract a mate by calling out with small short high pitch clicks to communicate they found food. They may not have found food but they still will use the sounds to attract the hen over to them. The rooster will then do a walk around the hen and begin a mating dance. The dance consists of the rooster hopping on one foot and dropping their one wing to the side and hopping on one foot around the hen. If the hen crouches the rooster will mount her and the hen will move her tail to the side allowing the rooster to tread and insert his semen into her cloaca. Some call this a cloaca kiss. The rooster will use his tail to balance while treading on the hen and hold onto her neck feathers with his beak. The actual mating only takes between 5 and 30 seconds. After the rooster steps off the hen she will do a post- coital fluff. She shakes her body upwards to move the semen into the reproductive tract.